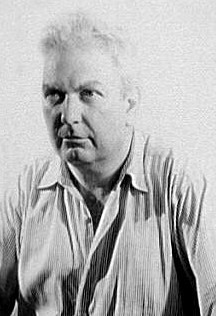 Alexander ‘Sandy’ Calder is descended from a long line of sculptors – his father Alexander Stirling Calder is the artist behind some of the world’s most famous public sculptures, such as George Washington as President in New York City’s Washington Square Park. His grandfather Alexander Milne Calder produced the sculptures for Philadelphia’s City Hall. The youngest Alexander Calder didn’t seek out a life of artistic greatness – in fact, he studied mechanical engineering at the Stevens Institute of Technology in New Jersey, earning his degree in 1919. But after spending several years working different jobs, the pull of art brought him back to New York where he enrolled in the Art Students League. Calder travelled the world studying and practicing his craft, but not fully leaving his engineering days behind him. He would become famous creating ‘mobiles’, or sculptures that contained discrete moving parts that gave the objects motion. He would also pioneer a form of sculpture that would be named by his peers ‘stabiles’ – stationary sculptures that were self-supporting and abstract.