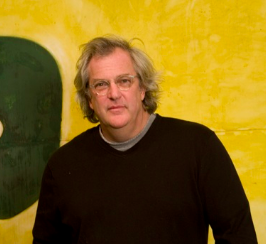 Born in the Blue Ridge Mountain town of Asheville, contemporary American artist Donald Sultan began making a splash on the New York art scene in the late 1970’s. Famous for his large-scale paintings and his experimentation with non-traditional surfaces and techniques, Sultan’s pieces were known for being ‘well-built’, not only in their imagery but also in the composition of the physical structures they were created on. The artist would often create his surfaces and images out of industrial materials, such as tar, spackle, enamel and vinyl tiles, blurring the line between ordinary, everyday objects and abstraction. He was particularly interested in subjects from nature – fruits and flowers – which made his choice of industrial tools and materials all the more experimental. Sultan’s works are held in the permanent collections of over fifty major international museums.