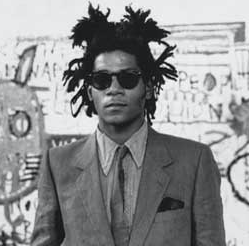 Contrast and dichotomy were a hallmark of the work that Jean-Michel Basquiat created in his short life. With a particular interest in the human experience, his pieces investigated the sharp contrasts in the world around us. Though extraordinarily gifted, Basquiat’s childhood was turbulent, and he found himself rebelling against the constraints of traditional education at his New York City school. This led to a rift with his father, his primary caretaker, and Basquiat would become homeless in his teen years. His ascent to the highest levels of the art world happened quickly, however, and after making a name for himself with Al Diaz creating graffiti throughout Manhattan using the name ‘SAMO’, Basquiat found himself participating in prestigious exhibitions throughout the world by the age of 22. Though he died a tragically by heroin overdose at just 27, he produced an estimated 1500 drawings and 600 paintings, as well as other works, throughout his short career.

Academic Study of the Male Figure (from the Leonardo series), 1983

Hollywood Africans in front of the Chinese Theater with Footprints of Movie Stars, 1983-2015