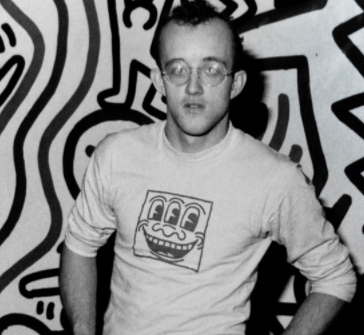 Keith Haring rose to prominence in the New York City art scene during the politically and socially turbulent 1980’s and used his art to examine difficult issues of the time. Though he attended the School of Visual Arts to study painting, it was his spontaneous graffiti in the city’s subways that gained him attention as an artist. Initially creating images that were more simple, clean lines and bold colors, he quickly evolved to incorporate politics and news headlines in his work. He ran in the same circles as many other controversial emerging artists, from Madonna to Basquiat. As he became more famous, his work was commissioned for some of the world’s biggest events like Philadelphia Live Aid. His life inspired his art – among the most prominent themes in his work were expressions of homosexuality and the AIDS epidemic, and he would unfortunately die from AIDS-related complications at the young age of 31.