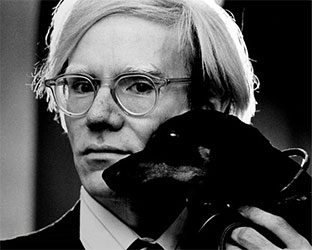 The idea of America is very much at the center of Andy Warhol’s iconic 20th century artistry. He entered the art world through his commercial work, with a clear artistic interest in American consumer goods, celebrities, and advertising. He quickly developed an extensive collection of work inspired by these interests and established himself firmly as a leader in the pop art movement. His most famous works focused on Marilyn Monroe, Campbell’s Soup cans, and Coca Cola – mainstays of American consumer life in the early 1960’s. By embracing the advertising and mass media worlds that many artists recoiled at, Warhol was able to cultivate a massive following and left a lasting impression on the art world.

John Wayne, from Cowboys and Indians, 1986

Portrait of the Artists, from Ten from Leo Castelli, 1967

John Wayne, from Cowboys and Indians, 1986